Downsizing Families: We’re living small so we can move to Spain

Welcome to another guest post in the Downsizing Families: Your House, or Your Life? series. Today we have Emma Healey who I first came across in the personal finance blogosphere on Money Can Buy Me Happiness. She's since started a new blog to specifically talk about Downsizing, so if you're looking for further inspiration, head on over there (link at the bottom of this post).

There's a clear theme in the Downsizing Families: Your House, or Your Life? series so far. Families that downsize, travel. #downsizingfamilies #downsizing

Emma is no exception there – but you'll find out as you read on!

Over to you Emma! 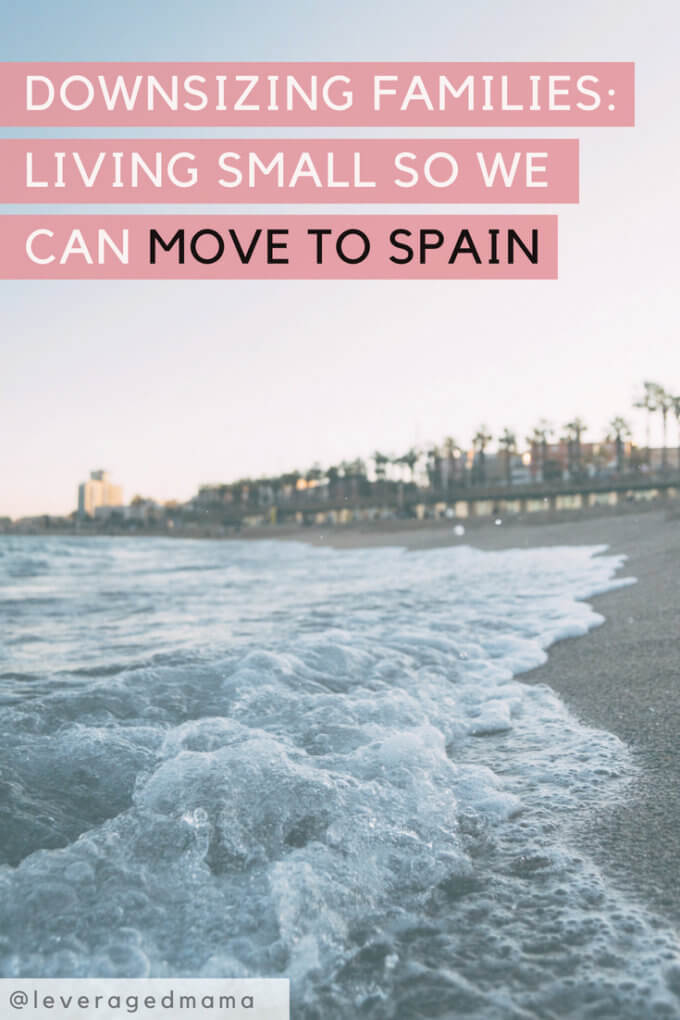 Photo by Mourad Saadi on Unsplash

Who makes up your family?

Tell us a little about your life before you downsized.

We were expat in Australia up until 2013, and had always lived in apartments or shared houses so we were used to compact living. But we fell into the trap of thinking we needed a big house for our kids and ended up purchasing a house in Christchurch, New Zealand (my hometown) where we intended to move once we started a family.

We found the perfect house for us on a trip home for Christmas in 2010. It was 3 bedrooms with a large separate dining room we could make into another bedroom. One bathroom, two toilets with a garage and a shed. It needed work but was liveable as it was.

We made an offer and it was accepted, with a due diligence period of 15 days to get the inspections and finance sorted. We went ‘unconditional’, paying our ten percent deposit and sealing the deal on the 18th of February, 2011.

We were back in Australia managing the process from afar. I remember surfing the net at work the Tuesday following when I saw a huge big red ‘BREAKING NEWS’ banner across the top of the screen.

I immediately tried calling my parents and brother but the phone lines were down and I couldn’t get through. I kept trying but nothing. Eventually I received a text that they were OK. They had no power or water, but they were all home and safe.

My next thought after checking in with my friends and family was the house. How bad was the damage? Had we just lost our entire life savings?

I flew to Christchurch 2 days later to help my family clean up and to survey the damage at our intended future family home.

It was bad. The brick chimney had fallen through the asbestos roof and into the living room. The tenant escaped unscathed but terrified. He left immediately and never returned. We were able to work with the seller to get the house in a livable condition and rent it temporarily while we settled the purchase.

We decided to return to New Zealand in 2013 to sort out the insurance process.

If there was a catalyst for downsizing for your family, what was it?

After a year spent fighting with our government insurance body over the extent of the damage, I was exhausted and depressed. I became anxious when the phone rang, and somewhat obsessed with insurance law and reading case studies online.

It was taking over my life and affecting my family. My husband and I decided to rent the house out and travel for a bit. The rental market was booming due to a lack of rentals so we easily secured tenants, put everything we owned in storage and boarded a one-way flight to San Francisco.

We ended up in Spain, where we rented a small apartment for six months while our two-year-old attended preschool. We wanted him to grow up bilingual. 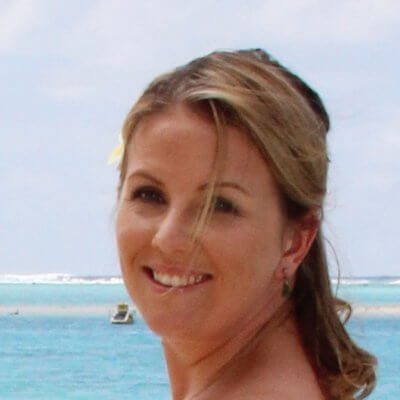 We had a lovely, simple life in Spain that consisted of lots of outside time, sunshine and cafes, and for a very low cost. @moneycanbuyme on Downsizing Families: Your House, or Your Life?

We had a lovely, simple life in Spain that consisted of lots of outside time, sunshine and cafes, and for a very low cost. @moneycanbuyme on Downsizing Families: Your House, or Your Life?

It was in Spain where we discovered we were pregnant again. We had to return home to have the baby, but we were resolute that we needed to find a way to return to Spain and make it our home for the long-term.

How did you downsize?

When we moved back to New Zealand we decided not to move back into our large house. We’d lived a perfectly wonderful life in a small apartment in Spain and didn’t want to fall back into the trap of always wanting more.

Instead, we moved into the small rental property we owned. It has 2 bedrooms, one bathroom, no garage, a tiny garden shed. It’s 860 square feet, or 80 square metres. Our large home was 128 sqm, so it was a big change for us. 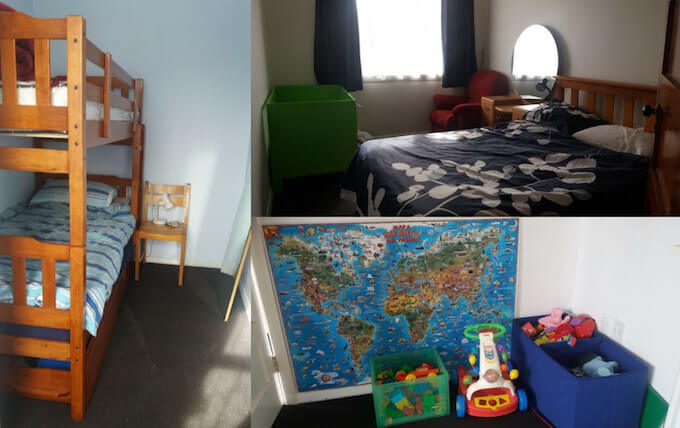 We kept the tenants (a large family) in our big house and set about making the small house a home, with a baby on the way.

What were your biggest concerns before downsizing, and how did that turn out?

I had many concerns. That we’d drive each other mad in such close quarters, that the toys would always be everywhere, that people would treat us differently and judge us because we were raising kids in a little flat.

Driving each other mad definitely happens, and it’s one of the reasons we decided against knocking through a wall to make a large open-plan kitchen and living room. Having separate spaces is very important for my family.

We manage the toys quite well, by being ruthless with what we bring in and discussing it with the kids, (you can read more about that on my Downsizing blog here )

What were the most difficult changes to adjust to?

I think the lack of storage space. As we were unpacking our storage unit we realised we had so much stuff we didn’t need and simply couldn’t fit in the new space.

Moving to a smaller home meant we had to deal with the clutter now, rather than shove it in the spare room like we had in the big house.

The good thing about decluttering from a storage unit is that it was away from our comfort zone so we could be ruthless about items without getting emotional.

Plus, we had a baby on the way, so we were forced to think outside the box for that one. We had a very minimalist approach to the baby gear (you can read more about that here), using what we had, buying used for the things we really NEEDED and we even rented a baby capsule so we could give it back afterwards and not let it become clutter.

How is life better after downsizing?

We save at least $600/month living in our smaller home. That is life-changing money. We have more money for travel and family time. @moneycanbuyme on Downsizing Families: Your House, or Your Life?

We save at least $600/month living in our smaller home. That is life-changing money. We have more money for travel and family time. @moneycanbuyme on Downsizing Families: Your House, or Your Life?

There’s also less cleaning and maintenance, which gives me more time to build my business.

Have your jobs changed since, or in order to support your downsizing (or as a result of it)?

I’ve been able to stay at home with the kids due to our downsize. The lower costs mean we don’t need the second income. I’m working on an online business to support us when we finally move to Spain. That is something I could never have done had we not downsized.

My husband found a job ten minutes from home so he bikes to work and we can remain a one-car family. The job pays less than his trade did, but he’s home by 4.10 every afternoon, is never on-call and has much lower stress levels.

Under what circumstances would you recommend downsizing to other families?

I think downsizing can benefit families in so many ways. Financially, a smaller and cheaper home can mean one parent gets to stay home with the kids or work less hours.

If a family dream of travelling together it’s a great way to save money and get used to living with less.

For readers thinking about downsizing, what tips do you have for them?

Don’t buy into the hype – do what’s right for you.

Although I’m obsessed with the thought of a tiny home, there is absolutely no way we could live in a tiny home with our kids. Plus, we really wanted to still own a property and be in the real estate market.

Instead, we live in an affordable home that is drastically smaller than most families of our size. It’s not as sexy as a tiny home, but it works for us.

Downsizing doesn’t have to mean moving house. You can start by decluttering the items you don’t use or love, and clearing space in your existing home. @moneycanbuyme on Downsizing Families: Your House, or Your Life?

Where can readers find about more about you?

I blog about our experience making our little house a lovely home at LittleHouseLovelyHome.com .

I'm totally crushing on Emma's downsizing site – she's got some great tips on decluttering too (and you know how much I love to declutter!)

Having downsized when my daughter was 12 months old, I understand that it takes quite a bit of organisation, and a wee bit of time to adjust. Decluttering and finding good ways to utilise storage is essential.

Emma – thank you so much for sharing your downsizing story with us. I guess you won't need to ship a lot over when you do move to Spain!